UPDATE: What ever happened to that script I submitted? Well, let me tell you..

So a couple of weeks ago I get this email. And I know it’s not a typical email, like from my friends or sister or mom. Those have the usual subject headings like, “yo” “hey sandy” or “hi it’s your mother you never call me anymore i love you”.

This email had a different subject line and was from an unrecognized email address. It was my professor’s. She’d contacted me to say that, yes, my script (you can read about it here) was received, read and judged by the committee, and that, yes, it had been short-listed. (SHORT LISTED!) But no cigar.

At first I was like, “what the balls! I suck… why do I even bother writing at all. God!” But that lasted for like, 10 seconds (who really has the time for self-deprecation anymore), because when I stepped back for a breather I realize that my script – my first go at a screenplay – made it all the way to a short list, which means that people actually liked my work, which means I’m not totally useless at the keyboard, which means that maybe I sniff a new career here, which means that it’s only a matter of time (what, six months maybe?) before HBO sends me an email (which I know will not be from my mother) asking me to write their next blockbuster series, which means it’s only a matter of time before I’m hob nobbing with the likes of Alan Ball, Diablo Cody and splitting a cigar with Speilberg. Right? …Right?

(I really need to stop drinking before I post.)

Anyway, the point is that I gave screenwriting a shot, a hit of what I had, and it came back to me with pretty good results for a first-time around, even if it didn’t win a chance to be produced, which was the “prize” all the screenwriters were chomping at the bit for.

I got another email from my professor (she is the lovely woman who first encouraged me to enter the contest). She told me that not only did I make the coveted SHORT LIST, but apparently my little number made it all the very top of at least one judge’s list. ONE WHOLE JUDGE. THE TOP OF HIS LIST.

So why am I sharing this news at the risk of sounding like oh, I dunno, I’m a big face, tooting my own horn, injecting my ego with a dose of pompous loser? Because giving myself credit at all is actually a big, big step for me.  I’m working hard on this during this reinvention of mine. Also, I share this news because I’m hoping you get inspired to hook yourself up with a little flattery, too.

People just don’t give themselves credit for anything anymore, do they? Not a pat on the back, not a high five, not a slap in the ass for doing a fucking awesome job. But then again, have we, as a modern society, ever done that? (Oh hell, did I just use the word “society”? Hang. Me. Now.)

But I do have a point, I swear! Read on.

Why is it so hard to throw ourselves a little well-deserved credit every now and again?

I mean, if a friend told me her first-time-ever screenplay made a short list, I’d buy her a drink! I’d tell all my other friends! I’d congratulate her until I was blue in the face and her cheeks were a rosy hue of “aw, shucks”. Why? Because that’s what you do when someone does something fucking awesome.

So there. This is my high-five, way to go, ass-slap, double-cheek kiss for having the balls to try something new, something I was afraid of, something that left me having to expose a once guarded side of myself… and then making a short list for it.

So, spill it. What awesome thing(s) have YOU done lately? Give yourself props in the comments box below.

(hey, and don’t be shy either.. um, I can see stats back here you know, and way more of you are reading, lurking, stalking and not commenting… spread the love now y’all)

Filed under #3 Finish my screenplay, Reinvention Inspiration, Stuff I know for sure

Tagged as giving yourself credit, slap my ass, we never give ourselves credit, writing a screenplay

Dear blog, it’s been five days since my last confession…

I’m not quite sure where the words have been lately, but they’ve escaped me more than once. I’ve attempted, edited, deleted and rewritten this post so many times only to tell you something that should be rather simple:

They’re short (very short) scripts that I entered into a screenwriting contest I’ve had my eye on for some time. Now, that might not seem like something that’s hard to share – “big deal” you say – but sometimes the words just escape you. And sometimes you just run out of words. Wherever those words are, I can tell you that most of them ended up on the pages of my scripts, that are just waiting to be judged now. I’ve really put myself out there. We’ll see what comes back.

I’m in somewhat of a word purgatory – somewhere between wanting to tell you everything on my mind and not having enough words to describe it. So I guess you could say I’m feeling a little lost for words these days, but that’s not necessarily a bad thing. It gives me time to process, to think, to marinade.

What I can muster is what my screenplays are about: One is a story of intense passion, and the other of faith. At first I thought these stories of mine had little in common, but then I realized that passion and faith have a thread that binds them together, keeping them just barely attached at the seems – we crave them both.

Some find passion in an instrument; on a blog; in a tube of paint; within a textbook; in the back of a 1987 Pontiac Tempest.

Some find faith in a place of worship; on a yoga mat; in the pages of a book; within the speech of a televangelist on a Sunday morning.

The point is not how you find passion and faith, but that you find them at all. In the last five days I’ve tasted a little of both. And some day soon I hope to find the words to tell you.

Filed under #3 Finish my screenplay, stuff on my mind

And another one bites the dust..

3. Finish my screenplay
I’m taking a screenplay writing course to keep on track and have a solid start. Lord only knows how off-track I can get with writing projects.

It’s Thanksgiving here in Canada and I’ll be gaining five pounds all weekend, so posting has to take a close second behind my pumpkin pie tarts (er, I’m going to share the recipe, but don’t laugh at me).

Also, I received my first Blogger-bestowed award this week, which was bitchin. Deets to come.

For now, I leave you with this – music from my FAVORITE. BAND. EVER. …

(Ok, so I’m totally sleeping with the guitarist.)

If you don’t click here, you’re totally missing out. 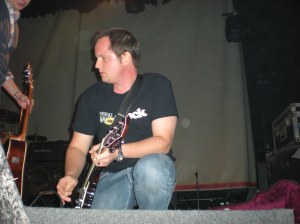 my husband rob. (the guitarist.)

Filed under #3 Finish my screenplay