Hey, pay attention to me! 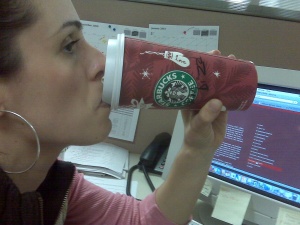 A picture of: Today, when I thought of you all and this post, this is what I was doing. Just because.

Stuff I Know for Sure #1

What I know: Nobody cares, so get over it
Let’s break it down real quick: This isn’t as negative as it sounds. Although I’ve blown-off my share of idiot people and comments in my short life, the truth is I DO care about what people think, sometimes to a fault. I’m going to go out on a limb here and guess that I’m not alone on that truth either. Right? We’re only human, after all, and come pre-packaged with flaws (Yes, even me. Crazy, I know). But I’m learning, more so since embarking on the journey that is my List, that whether it’s wearing what I want, saying what’s really on my mind, taking risks like jumping out of planes or nude beaching it or, in earnest, standing by my decision that pickles and mayo do, in fact, go together, in the end what I think is my own opinion… and really, nobody cares. You know why? Because most people have their own opinions to sort through and are probably paying less attention to my blunders than I realize. In the end, thinking that others are thinking (or judging ) my every move is just ego talking, while insecurity eggs it on- like two Frat Brothers, one who farts over a butane lighter and the other who encourages it. See, nonsense.
Here’s how I figure it: Most people care about what they’re wearing today, their own career, misadventures, problems, troubles and bad examples of “haute cuisine”. So ya, people have their own lives to pontificate. Trust me when I say that when you’re doing your thing, no one is watching, so go for it, balls to the wall. But, and I must insert this caveat: Do “your thing” with confidence, authenticity and kindness and people will notice you, which can be a very great thing, especially when the person noticing you is someone you’re noticing right back. That’s just called being inspired.
The bumper sticker worthy take home message: live, like nobody’s watching.
I have an question AND since everyone has been comments shy lately, I’m hoping you’ll come out to share your answer to this:
If you thought no one was watching, what would YOU do?

Filed under Reinvention Inspiration, Stuff I know for sure

6 responses to “Hey, pay attention to me!”